The Government of India has initiated a decentralized, state based Integrated Disease Surveillance Project (IDSP) in the country in response to a long felt need expressed by various expert committees.

The project would be able to detect early warning signals of impending outbreaks and help initiate an effective response in a timely manner. It is also expected to provide essential data to monitor progress of on-going disease control programs.

Goa has commenced the implementation of the project from 1st of April 2005. IDSP has replaced the NSPCD (National Surveillance Programme for Communicable Diseases), which was operational in the state since 1999.

Diseases and Conditions under Surveillance

Functions and duties out by the Department

IDSP is a district based surveillance programme intended to detect early warnings signals of impending outbreaks and help initiate an effective response in a timely manner. It also provides trends of on going diseases in the state.

IDSP maintains the weekly surveillance data of the Syndromic, probable cases and Lab confirmed cases of Communicable diseases for the particular week. This data is analyzed on weekly basis at District, State and Central level and feedback is given to peripheral Health units as and when required.

IDSP sends weekly online Report to Central Surveillance Unit, Delhi every Thursday on IDSP portal. The Laboratory Report from the Department of Microbiology, Goa Medical College and District Priority laboratory, Hospicio Hospital are reported to the CSU every week.

IDSP also prepares monthly report on the surveillance data to be presented at the monthly meeting.

IDSP monitors H1N1 Influenza (Swine Flu) situation in the state and conducts the surveillance and containment measures through all the peripheral Units. Throat Swabs Suspected cases of H1N1 are sent to NCDC-Delhi for testing.

Training of Medical Officer, Pharmacists & Nurses are conducted under IDSP.

Under IDSP two rapid Response Teams are been identified, one for each dist.

Kyasanur forest disease (KFD) is a tick-borne viral haemorrhagic fever endemic to South-western part of India.[1] The disease is caused by a virus belonging to the family Flaviviridae. KFDV is transmitted to humans through the bite of infected hard ticks (Haemaphysalis spinigera) which act as a reservoir of KFDV.

The symptoms of the disease include a high fever with frontal headaches, chills, Severe muscle pain with vomiting, gastrointestinal symptoms and bleeding problems may occur 3–4 days after initial symptom onset. Patients may experience abnormally low blood pressure, and low platelet, red blood cell, and white blood cell count. After 1–2 weeks of symptoms, some patients recover without complication, However, the illness is biphasic for a subset of patients (10-20%) who experience a second wave of symptoms at the beginning of the third week. These symptoms include fever and signs of neurological manifestations, such as severe headache, mental disturbances, tremors, and vision deficits.[2][3][4] The convalescent period is typically very long, lasting for several months. Muscle aches and weakness also occur during this period and the affected person is unable to engage in physical activities.

Cases of Fever are being reported from Pali – Thane, Sattari, since last week of
February. All the patients have received necessary treatment and few were being
referred to higher centers as and when required. However four of these patients
who were suffering from other co-morbid conditions succumbed to death in Goa
Medical College.
Although this department had done Field investigation by sending Rapid
Response Teams twice, and also tested these cases for various illnesses like
Hepatitis A & E, Dengue, Chikungunya, Malaria, Typhoid Fever, Leptospirosis,
Swine Flu; till date no specific cause had been identified. Appropriate water
samples that were tested for biological & chemical analysis also did not show any
significant results. Thus the issue was discussed with National Centre for Disease
Control (NCDC), Delhi and Manipal Centre for Viral Research (MCVR), Manipal
following which a team from MCVR, Manipal visited Pali village under the
guidance of Dr. Arun Kumar (Professor and Head, MCVR, Manipal University) and
Dr. Utkarsh Betodkar (State Surveillance Officer, Directorate of Health Services,
Campal) along with the Health officer and field staff of Community Health Centre
Valpoi. Detailed investigations were carried out and serum samples of 20 patients
were collected for testing at MCVR, Manipal. Out of these 20, 18 samples tested
positive (which even included sample of one expired patient) for Kyasanur Forest
Disease Virus (KFDV).
Following the confirmation of the etiology of fever outbreak at Pali, Thane as KFD,
this department has already informed the same to the department of Animal
Husbandry &Veterinary Services and Forest Department so that necessary tick
control measures are taken. Also Health Officer, CHC Valpoi is been informed to
conduct awareness activities in the locality.
Further Team from National Centre for Disease Control (NCDC), Delhi will be
visiting the state to carry out detailed investigation of the outbreak and also give
expertise in prevention and control measures in the affected area.

Kyasanur Forest disease (KFD) is caused by Kyasanur Forest disease virus (KFDV).
KFDV was identified in 1957 when it was isolated from a sick monkey from the
Kyasanur Forest in Karnataka (formerly Mysore) State, India. Since then, between
400-500 humans cases per year have been reported.
Hard ticks (Hemaphysalis spinigera) are the reservoir of KFD virus and once
infected, remain so for life. Rodents, shrews, and monkeys are common hosts for
KFDV after being bitten by an infected tick. KFDV can cause epizootics with high
fatality in primates.

Transmission
Transmission to humans may occur after a tick bite or contact with an infected
animal, most importantly a sick or recently dead monkey. No person-to-person
transmission has been described.
Large animals such as goats, cows, and sheep may become infected with KFD but
play a limited role in the transmission of the disease. These animals provide the
blood meals for ticks and it is possible for infected animals with viremia to infect
other ticks, but transmission of KFDV to humans from these larger animals is
extremely rare. Furthermore, there is no evidence of disease transmission via the
unpasteurized milk of any of these animals.

Signs and Symptoms
After an incubation period of 3-8 days, the symptoms of KFD begin suddenly
with chills, fever, and headache. Severe muscle pain with vomiting,
gastrointestinal symptoms and bleeding problems may occur 3-4 days after
initial symptom onset. Patients may experience abnormally low blood pressure,
and low platelet, red blood cell, and white blood cell counts.
After 1-2 weeks of symptoms, some patients recover without complication.
However, the illness is biphasic for a subset of patients (10-20%) who experience
a second wave of symptoms at the beginning of the third week. These symptoms
include fever and signs of neurological manifestations, such as severe headache,
mental disturbances, tremors, and vision deficits.
The estimated case-fatality rate is from 3 to 5% for KFD.
Risk of Exposure
KFD has historically been limited to the western and central districts of
Karnataka State, India. However, in November 2012, samples from humans and
monkeys tested positive for KFDV in the southernmost district of the State which
neighbours Tamil Nadu State and Kerala State, indicating the possibility of wider
distribution of KFDV. People with recreational or occupational exposure to rural
or outdoor settings (e.g., hunters, herders, forest workers, farmers) are
potentially at risk for infection by contact with infected ticks. Seasonality is
another important risk factor as more cases are reported during the dry season,
from November through June.

Diagnosis
Diagnosis can be made in the early stage of illness by molecular detection by
PCR or virus isolation from blood. Later, serologic testing using enzyme-linked
immunosorbent serologic assay (ELISA) can be performed.
Treatment
There is no specific treatment for KFD, but early hospitalization and supportive
therapy is important. Supportive therapy includes the maintenance of hydration
and the usual precautions for patients with bleeding disorders.
Prevention
A vaccine does exist for KFD and is used in endemic areas of India. Additional
preventative measures include insect repellents and wearing protective clothing
in areas where ticks are endemic

Name of the State: Goa

Organizational Chart of the Department: 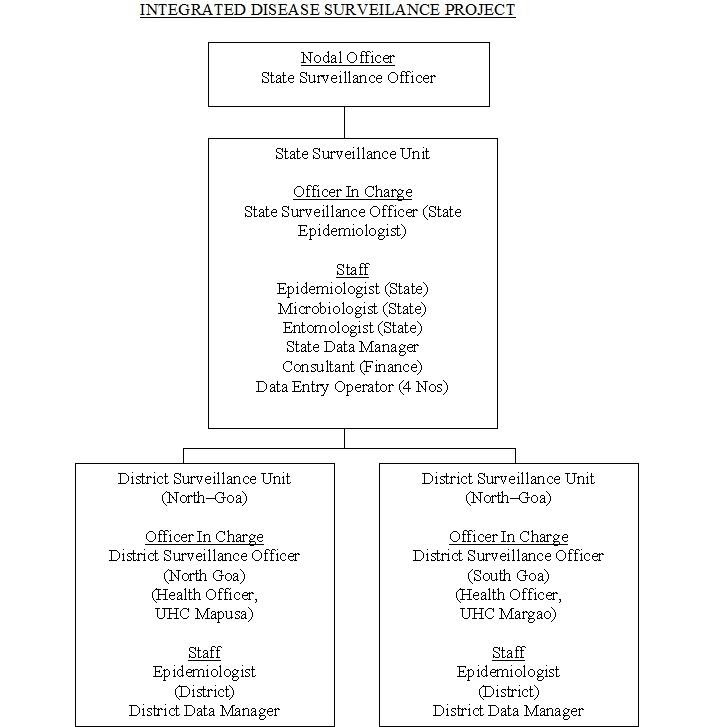